I thought that most developers knew why the singleton pattern should be avoided and what is the correct approach.

So I was surprised when I discovered that many iOS developers don’t know this.

In this article, I’ll show you what a singleton is, why you should not use singletons in your apps and what you should use instead.

What is a singleton in Swift?

First of all, let’s clarify the definition of a Swift singleton.

Part of the confusion about singletons comes from the unclear distinction between global variables, singletons, and shared instances.

On Wikipedia, the singleton pattern is defined as:

A software design pattern that restricts the instantiation of a class to one.

Only classes can be singletons in Swift. Structures are value types, and copies are created every time you pass a value to a function or a type. This clearly defeats the purpose of singletons.

But the definition of singleton that Apples provides in its documentation is different:

You use singletons to provide a globally accessible, shared instance of a class.

This definition is not unique to Apple’s documentation. The Wikipedia article I linked above also states that “An implementation of the singleton pattern must provide global access to that instance.”

But Apple’s definition does not mention restricting the number of instances to one.  And indeed, that is what usually happens in iOS development.

How to implement a singleton class in Swift

If you are here just to grab some code, I’ll show you how Swift singletons work first and spare you more searched. Later in this article, I will explain why singletons are a shortcut you should not use.

In Swift 4, creating a singleton according to Apple’s definition can be as short as three lines of code.

The shared property is static, so you can access it from anywhere in your code. This ensures global access.

Notice that you can still create other instances of the Singleton class in your code if you want. We haven’t restricted those.

Technically, the shared property of Singleton is a global variable. There is no distinction between a singleton and a variable defined in the main scope of a Swift file.

The following code is equivalent:

The sharedSingleton constant is also directly accessible from anywhere in your code.

In practice though, the first option is the preferred one, since it puts the shared singleton instance in the namespace of its class. But keep in mind that, since global variables and singletons are the same, they have the same problems.

If you need to perform some extra setup when you create a shared singleton instance, you can do so using an initialization closure.

This technique is not limited to singletons. You can use it to initialize any property in a type.

This technique works because parentheses immediately follow the closure. This causes the closure to be executed, and its result to be assigned to the shared static property.

Finally, if you want to follow the original singleton pattern definition and also ensure that there is always only one instance of the Singleton class, you can make its initializer private.

Why Swift singletons are so popular in iOS development

There is no denying that singletons have been popular for a long time in iOS development. To some extent, they still are. There are many reasons for that.

First of all, Apple does not show many Swift design patterns in its documentation, but singletons are right there in the list.

So it looks like Apple encourages the use of singletons. Moreover, Apple’s documentation shows how to create a singleton, but does not discuss the implications. That makes it look like the singleton pattern has no drawbacks.

The second reason is that Apple uses singletons extensively in the iOS SDK. Here are a few examples of the most common ones:

The UIApplication singleton makes sense since it represents the currently running app. There should be only one instance of this class.

In fact, even Apple follows the original definition of singleton in this case. You cannot create another UIApplication instance in your app.

But at runtime, it will throw an exception and crash your app.

The other singletons in the list above though are not “real” singletons. You can create instances of UserDefaults, FileManager, URLSession, and OperationQueue. In fact, it is often better to work with separate instances of these classes.

These singletons exist only for the convenience of a globally accessible instance. And that’s the biggest reason why singletons are popular. They are very convenient.

Singletons allow you to conveniently share state between view controllers

In any app with more than a screen, you will sooner or later need to access a shared resource. To understand why singletons are so popular, let’s look at an example app that uses a singleton.

Let’s make a small social networking app. Such apps usually have a screen where the user can see his profile and a screen where to edit the information. You can grab the code for the full app on GitHub. 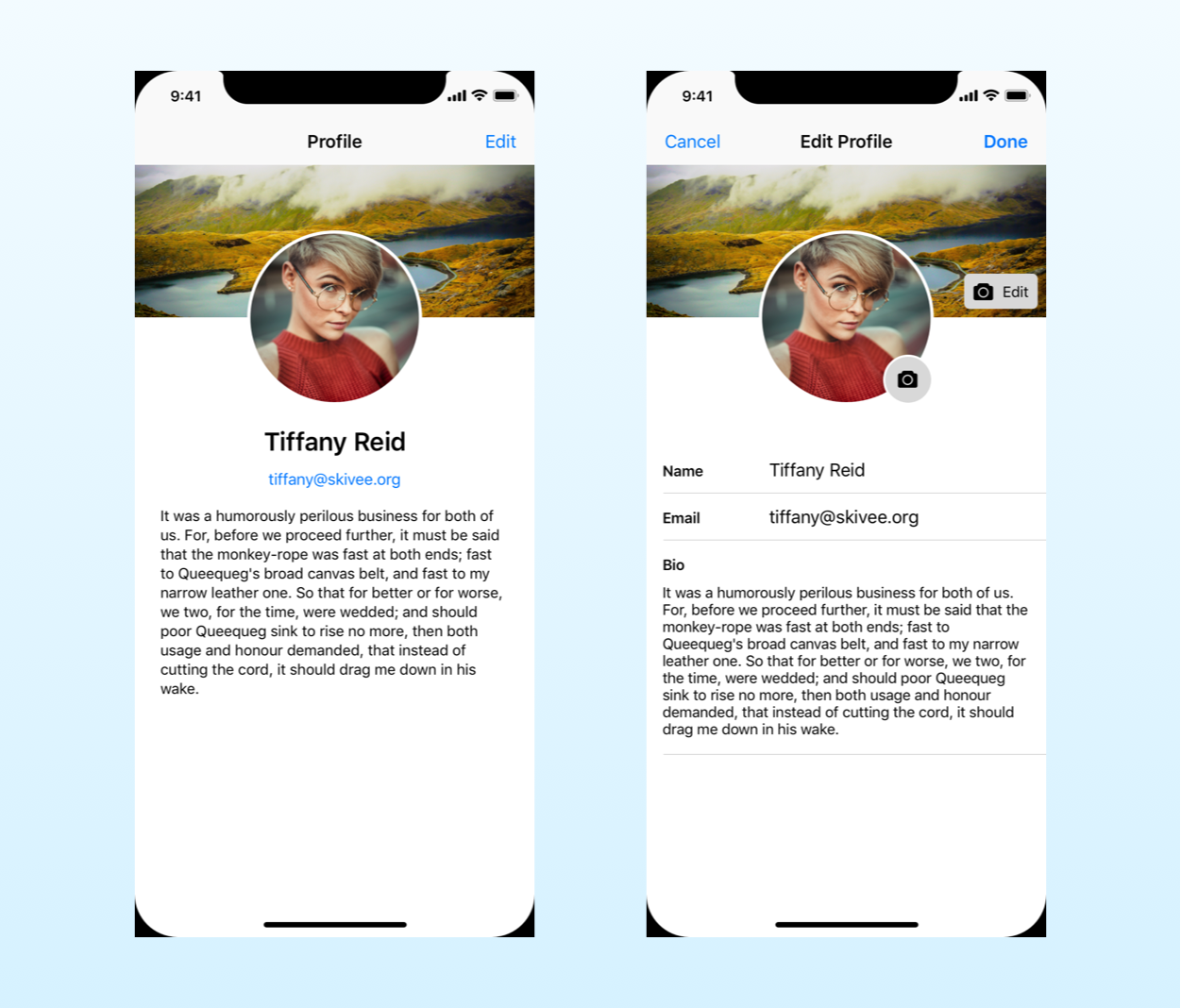 Below, I will concentrate only on the code for shared resources. If you want to see how to build interfaces like the ones above, check my article on Auto Layout.

First of all, let’s build the UI in an Xcode storyboard. 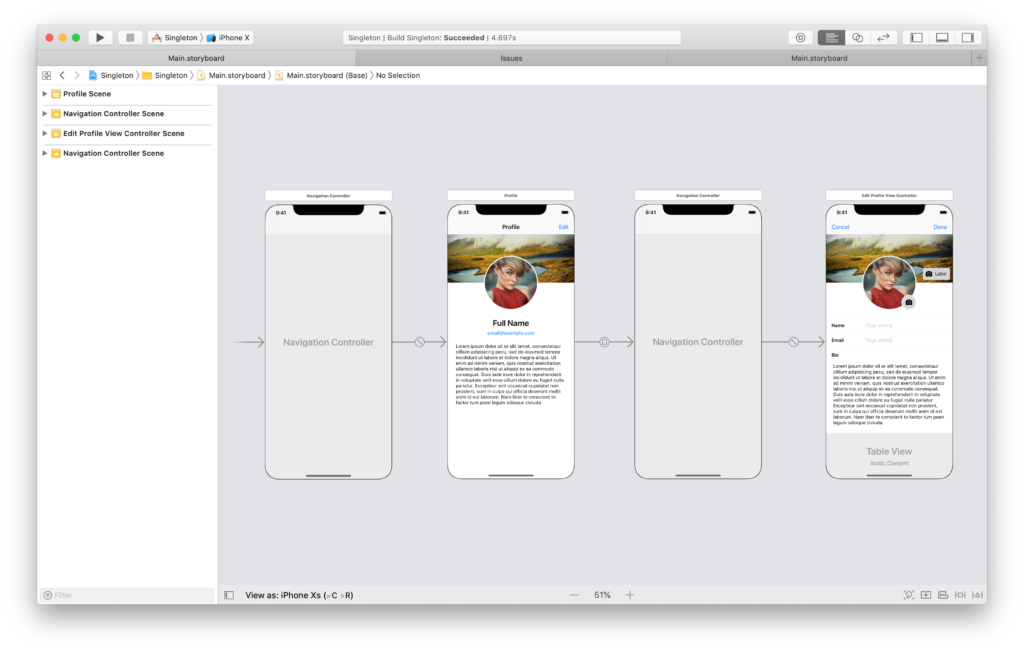 The navigation controllers are needed to display the navigation bar at the top of the screen. You can find more details in my article on iOS storyboards.

In our code, we start representing the data of a user in the model, using a Swift struct.

The User structure conforms to Codable so we can easily save it to and read it from the disk.

Here I used property lists to store data on the disk, but iOS offers also other storage technologies.

At this point, developers new to iOS face a usual problem. How do you get a shared instance of  StorageController into both view controllers?

The typical answer is: make it a singleton.

I put some default data in the initializer to have some to run the app. That’s not usually necessary in a real app where the user provides the data instead, but I’m keeping things simple for the sake of the example.

And this is the view controller for the Edit profile screen:

And, indeed, it works!

That is why singletons are widespread. You get to solve the complex problem of sharing resources between view controllers with a few, quick lines of code.

But it’s also a wrong solution.

Sure, you save some time taking this shortcut, but this code will bite you back later when the architecture of your app grows or when you add unit testing to your project.

The many reasons why singletons are a terrible solution

While singletons are a quick solution, they are a dirty trick that many consider being an anti-pattern. If you search for “singleton anti-pattern” on Google, you will find many results like this one.

So, let’s look at the many reasons why singletons are a weak solution.

If singletons are the wrong solution, what is then the correct one?

The critical point here is the distinction between singletons and shared resources.

In any real app, shared resources are necessary and unavoidable. There are always parts of an app’s architecture that need to be accessed from many places. Some examples are:

What makes singletons wrong is not the sharing of a resource. It’s the global accessibility.

So, the solution is not removing shared state, but using a different mechanism to share resources.

That mechanism is dependency injection.

Dependency injection is the de-facto technique to share resources between objects without using singletons. More generally, it makes the dependencies of an object replaceable. This is useful in many contexts, including unit testing with test doubles.

Dependency injection is simple to implement. All you need is a public property for each dependency you want to inject in an object.

In our ProfileViewController this is how it looks:

Now, the question is: where should these dependencies come from?

There are many techniques to pass data between view controllers in iOS.

In simple architectures like MVC, the app delegate injects shared resources into the initial view controller of the app.

Here we have to dig into the navigation controller, to get to the ProfileViewController. This is not necessary, but it’s common to have a container as the initial view controller of an app.

Other view controllers get their dependencies when a transition happens, and a segue is triggered, from the view controller that was previously on screen.

If you run the app, it works exactly as before. But there are no singletons anymore.

In more complex architectures, dependency injection is usually operated by coordinators. I talk about those in the article where I cover my version of MVC, the Lotus MVC Pattern

There are many articles online which try to answer the question: “when is it ok to use a singleton?”

My answer is: never.

That might sound a bit strict, but the drawbacks of singletons outweigh the little benefits of taking the shortcut. You can, and should, always solve the problem using dependency injection.

It must be said that it can be difficult to convince other developers in your team to ditch singletons. This is a message I got from one of my students:

I started to apply your techniques and best practices in my everyday job. But my boss told me I have to use a singleton because it’s more understandable and it’s less code. Although he is an experienced programmer, he told me there is no real reason not to use singletons. I told him everything you wrote about it, but in response, I got something like: “I understand you’ve read some smart books, but you have no idea how it works”

If that’s your case, I can sympathize with you. I hope that this article will help you convince others.

I used singletons only at the beginning of my career when I didn’t know better. The singleton I wrote for this article is the first one I write in years of making iOS apps.

Unfortunately, Apple seems to be hell-bent on using Singletons in its tutorials, including the new one they created for SwiftUI. But even in SwiftUI, a correct architecture is crucial. You can find out more in my free guide below.

10 thoughts on “Swift Singletons: A Design Pattern to Avoid (With Examples)”