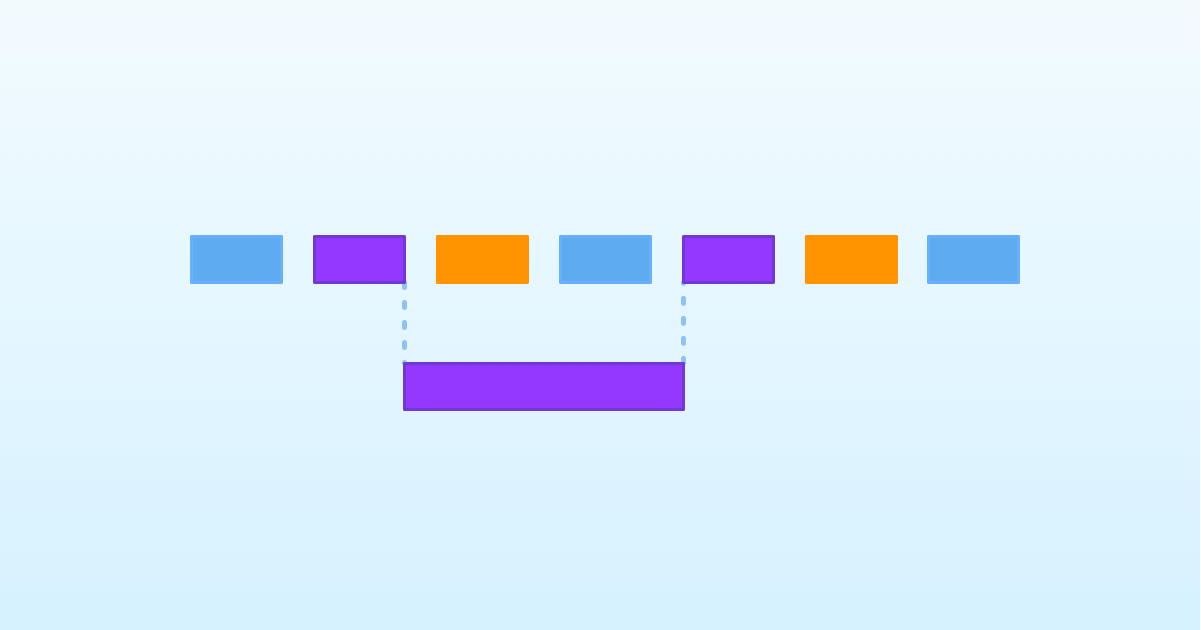 Asynchronous code can be suspended and resumed later, allowing your app to keep its UI responsive while working on long tasks, like performing network requests to a REST API.

You often run asynchronous code in parallel to make the best use of resources like the cores on your device’s CPU or internet bandwidth.

In this article, we will see how to run asynchronous functions in Swift and iOS apps using async/await.

Why do we need asynchronous functions in iOS apps?

When you learn Swift for the first time, your programs run from start to finish. Even if you split a large program into functions organized in structures or classes, the code will always run in the same sequence.

However, the nature of iOS apps is different, and they are not as exact. Most of the time, the app is idle, waiting for input. When the user interacts with the app or input is received from the device’s sensors, an event is triggered, and code gets executed. Some of this might be your code.

The code changes the app’s internal state by affecting its data or the state of its user interface (for example, by changing the scrolling position of a list). As a consequence, what appears on the screen must be updated to reflect the new app state.

To the user, all of these changes appear to happen simultaneously. But that’s not how computers work, and this is where asynchronous functions are helpful.

Modern operating systems use complex techniques for time sharing, multitasking, and threading that make it possible to run code concurrently on a CPU that can only run instructions sequentially.

You can read about these techniques if you want, but you do not have to, as the technique used in an iOS app is a much simpler model. Any iOS app constantly cycles through a run loop which has three phases: 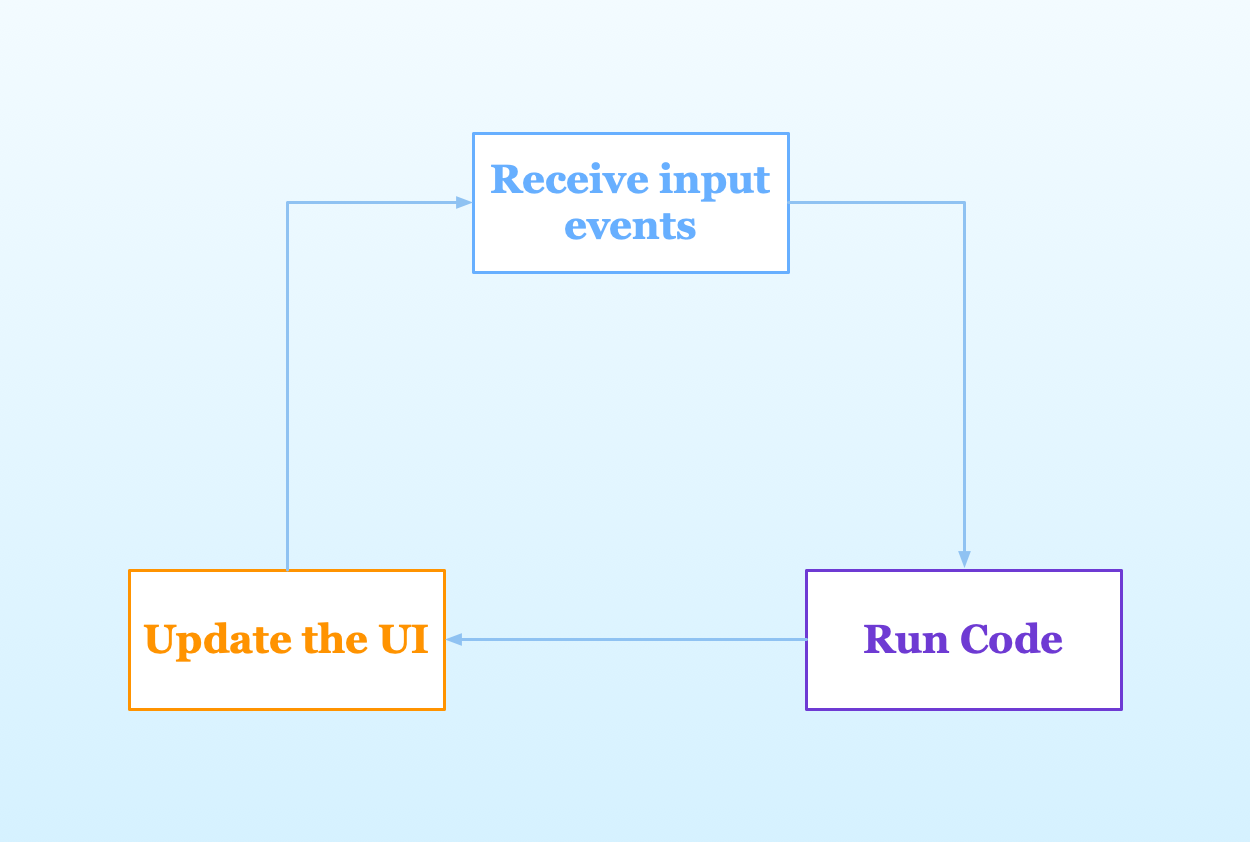 This works well until you need to run code that takes a long time to execute.

Since each phase in the run loop runs in sequence only after the previous step is finished, code that takes too long to run delays the UI update and input phases. This makes your app’s user interface behave unevenly or even remain unresponsive for seconds.

This is where concurrency and asynchronous functions come to the rescue.

When you call an asynchronous function, your code is suspended, leaving the app’s main thread free to run the app’s run loop.

The asynchronous function runs on a separate thread, taking as much time as it needs. When it has finished and returns a result, the system picks up your code where it stopped and continues to execute it.

Code can take a long time to execute for two reasons:

Of all these possibilities, fetching data from the Internet is the most common reason for a delay in iOS apps. So, it’s no surprise that the URLSession class, the type from the Foundation framework that you use for network transfers, sports several asynchronous functions.

How to use asynchronous functions in Swift

In Swift, asynchronous functions are marked with the async keyword after the function name and before the return type. For example, this is the declaration of the data(from:delegate:) method of URLSession.

Asynchronous functions can throw errors like any other function. In this case, the data(from:delegate:) method will throw an error when there are problems with the network transfer.

First, let’s look at how to use the asynchronous function. This example downloads a random image from the Dog API. You will find the complete code on GitHub.

The random image endpoint returns JSON data that we can model with a Codable structure.

We can then write a function to fetch a random dog from the API, using the data(from:delegate:) asynchronous method of URLSession.

Here you can see for the first time that you have to use the await keyword to call an async function. Since the data(from:delegate:) can also throw an error, we have to use the try keyword as well, as we would with any other throwing function.

Our fetchDog() function only fetches some JSON data. What we want, though, is the actual image of a dog at the URL contained in the JSON data.

This means we have to make another network request when the first one finishes. This is as simple as calling two asynchronous functions one after the other.

Each await keyword marks a suspension point in our code. When execution reaches it, it stops and gives back control of the main thread to the app’s run loop.

Creating tasks to run asynchronous code in Swift and SwiftUI

Swift allows you to start asynchronous tasks inside the typical synchronous code that makes an app, including SwiftUI views.

However, most of the code that we write is synchronous. We need a way to overcome the barrier between synchronous and asynchronous code and interrupt the infinite upward chain of async functions.

We can do this by using the Task type.

The initializer of the Task structure takes a sendable closure. You can call asynchronous functions using await inside this.

Tasks create an environment where you can execute and manage asynchronous work on a separate thread. You can run, pause, and cancel asynchronous code through the Task type.

The surrounding code remains synchronous, so the main execution is not suspended at the Task initialization but proceeds past it as usual. Suspension only happens at the await keyword inside the closure. 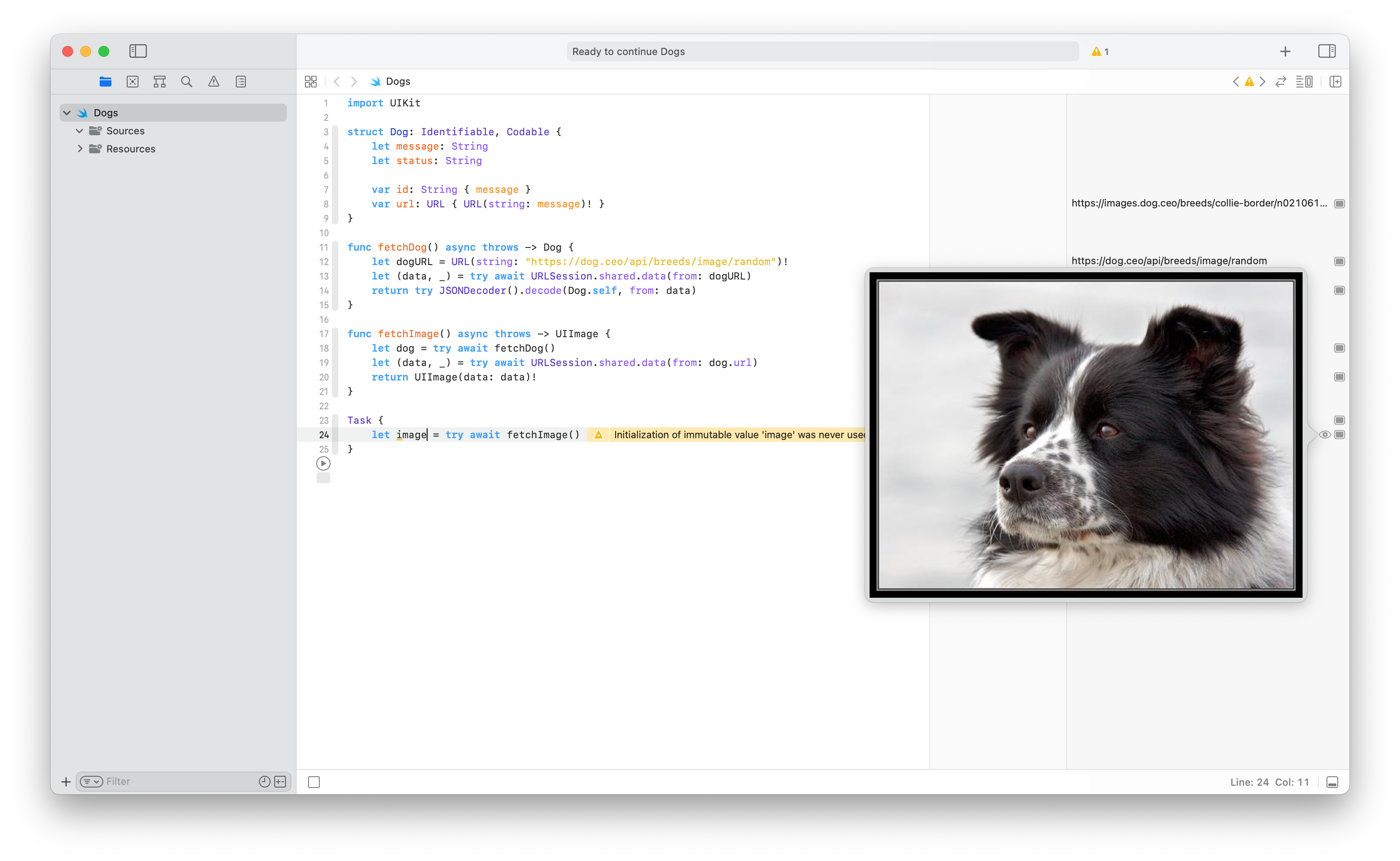 More commonly, you will be triggering asynchronous code from SwiftUI views. You can use the Task type in this situation as well, either in the action closure of some view, for example, a button, or in a SwiftUI event view modifier like .onAppear.

Triggering network requests when a SwiftUI view appears is so common that SwiftUI even provides a .task modifier for that specific purpose. 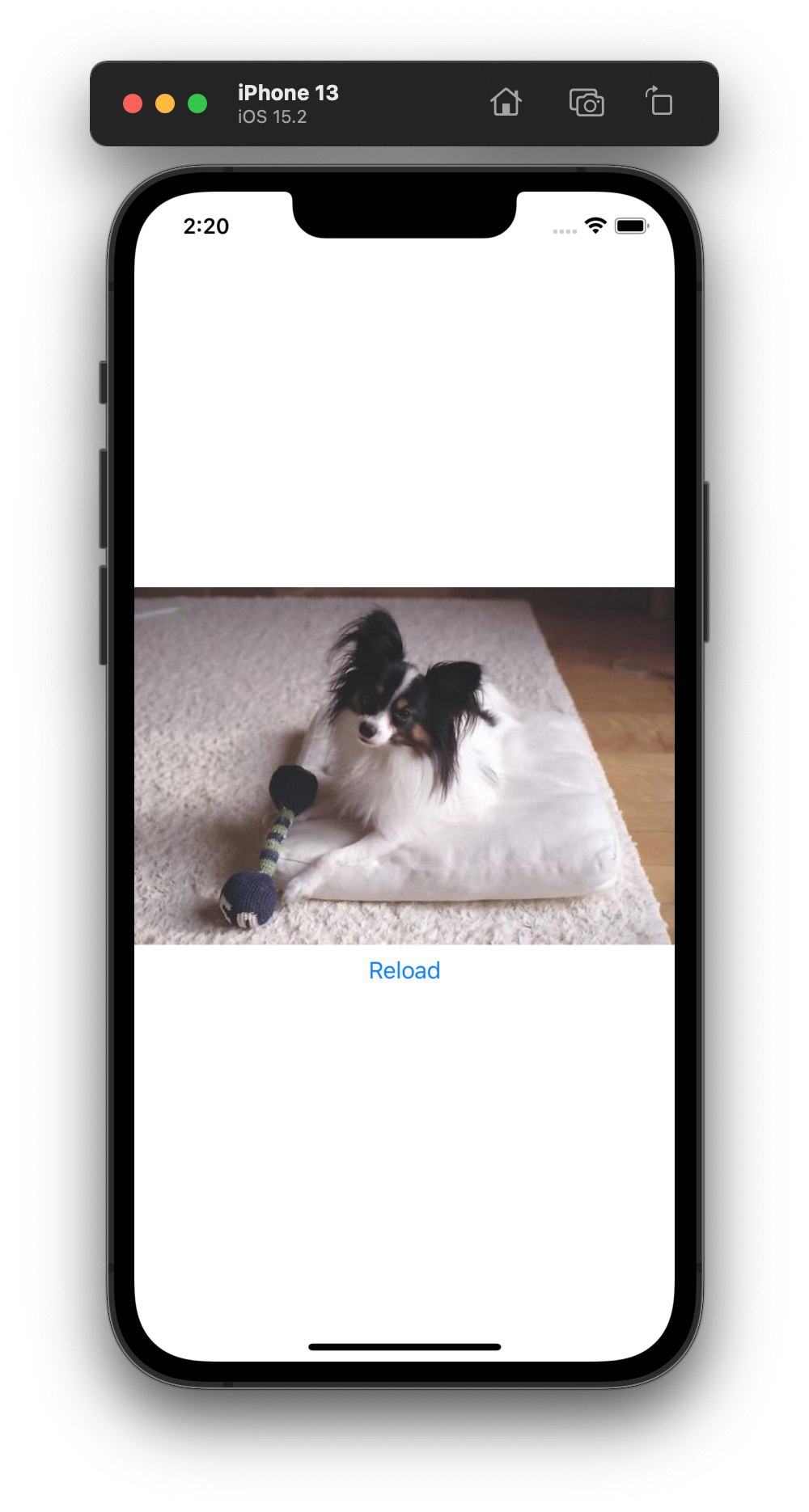 The advantage of using the .task modifier over the .onAppear modifier is not just its brevity. The .task modifier keeps track of the task it creates and cancels it when the relative view disappears from the screen.

This is useful to automatically cancel any network request in progress when the user navigates back to a previous screen in an iOS app.

At times, you’ll need to run some asynchronous tasks in parallel to optimize the use of the CPU’s cores or internet bandwidth.

You can create separate Task instances to run asynchronous functions in parallel, but it is complicated to manage and synchronize the tasks as they finish.

For example, let’s fetch the JSON data for three dog images simultaneously from the remote API.

Notice that we didn’t use the `await` keyword when calling the asynchronous fetchImage() function this time.

We do not create suspension points when we use async let instead of await. Execution proceeds normally past each asynchronous call, starting an asynchronous task for each call.

We only use await at the end of the function when we need the content of all the constants to create the final array. Execution is suspended at that point only and resumes when all three results have been fetched.

If you are (relatively) new to Swift and iOS development, concurrency through async/await should be your primary choice.

From Xcode 13.2 onwards, Swift concurrency is deployable back to iOS 13 and macOS Catalina 10.15, allowing your app to support at least two prior iOS versions as is customary in iOS development.

The following section is for you if you need to work with older OS versions or with codebases written before the introduction of concurrency in Swift 5.5 at WWDC2021.

Before Swift concurrency, asynchronous functions used completion closures as callbacks. You can see one example in the old dataTask(with:completionHandler:) method of URLSession.

Such closure gets the data and response as parameters. And since execution is not suspended, throwing errors does not work either, so any error is also passed to the closure as a parameter.

You then have to check such parameters in your code and handle each case appropriately. This is what it would look like if we were to rewrite our fetchDog() function to use completion closures.

Our three-lines-long function is now a readability nightmare.

While using async/await is clearly better, if you have a project full of callback-based asynchronous functions, you might not have the time to rewrite them all to use Swift concurrency.

So, are you condemned to use completion closures in your project forever?

Luckily, you aren’t. You can use checked continuations to transform your callback-based asynchronous functions into async functions.

If your completion closure does not use the Result type but separates data and errors into separate parameters, like the dataTask(with:completionHandler:) method of URLSession above, the CheckedContinuation type also has methods for returning values and throwing errors.

Managing asynchronous events with Combine or other FRP frameworks

The proponents of FRP are often quick to highlight the fact that it has several uses. While that is true, in iOS, FRP frameworks like Combine or RxSwift before it are mainly used to manage asynchronous code.

This is not a controversial statement. It’s spelled out in the introduction of Apple’s documentation for Combine. On top of this, NSURLSession has a Combine interface for data task publishers.

The reason why is easily understandable from the last example above. Our callback-based asynchronous function is already quite complex.

Granted, that is an imperfect method. Nonetheless, I think that with the introduction of Swift concurrency FRP will become less and less popular.

Some might argue that using Combine is better than standard callback-based asynchronous functions, but I disagree.

The simplicity of the async/await model, with the full power of Swift concurrency and the actor model, is a clear winner for me. And if there were still some doubts, I that think the new Swift Async Algorithms package, that replaces Combine’s most used features, clears them away.

In this article, we have seen how to use async/await in Swift to perform asynchronous functions, especially network requests, both sequentially and in parallel.

We also looked at how to bridge between synchronous and asynchronous code, including in SwiftUI.

In any complex app, simply calling asynchronous functions is not enough. It is also essential to know where to do this in an app’s architecture. To learn this, you can read my article on network requests and get my free guide on MVC and MVVM in SwiftUI in the box below.